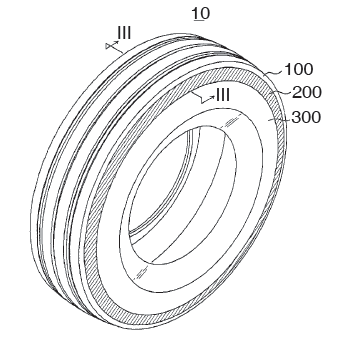 Pneumatic tire
U.S. patent: 10,947,368
Inventors: Nihat Ali Isitman, Claude Charles Jacoby, Manuela Pompei, Luisa Fernanda Munoz Mejia, Carlo Kanz and Marc Weydert
Assigned: Goodyear Tire & Rubber
Key statement: The present invention is directed to a pneumatic tire having a tread comprising a vulcanizable rubber composition comprising, based on 100 parts by weight of elastomer (phr), (A) from about 20 to about 60 phr of a solution polymerized styrene-butadiene rubber having a glass transition temperature (Tg) ranging from -85°C to -50°C; (B) from about 45 to about 80 phr of a polybutadiene having a cis 1,4 content greater than 95 percent and a Tg ranging from -80 to -110°C; and (C) from 0 to 20 phr of a process oil; (D) from 55 to 80 phr of a resin selected from the group consisting of C5/C9 resins and DCPD/C9 resins, the resin having a Tg greater than 30°C; and (E) from 110 to 160 phr of silica.

Composite and pneumatic tire
U.S. patent: 10,940,718
Issued: March 9, 2021
Inventors: Natsuki Maekawa, Koji
Fujisawa, Hiroshi Ito, Ryosuke Harada and Daiko Fujimori
Assigned: Sumitomo Rubber
Key statement: The present invention provides a composite that has good initial adhesion and good adhesion after high temperature and high humidity aging. Provided is a composite including: a topping rubber composition having a fatty acid content of 0.8% by mass or less; and an adherend plated with a copper-containing layer.