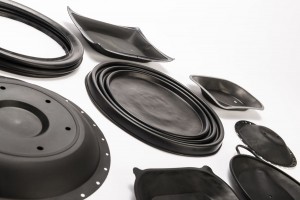 Fluoroelastomers are used for applications where severe heat and chemical resistance are required. FEPM is based on an alternating copolymer of tetrafluoroethylene (TFE) and propylene (P). It is well known to have excellent chemical resistance against organic and inorganic acids and bases, especially amines formulated in various automotive lubricants. Fluoroelastomers consisting of vinylidene fluoride and hexafluoropropylene (FKM) are not as resistant to organic and inorganic bases, especially aqueous solutions of bases at high temperatures. However, FEPMs demonstrate difficulties in processability. For example, they exhibit insufficient performance with curability and mold release, especially in compression set processing. Several cure systems have been proposed to improve the curability and processability.